The UF Diabetes Institute completed its third year in 2017, pushing forward toward its overarching mission to improve the lives of those living with diabetes so that we may one day see a diabetes-free world.

With one new person diagnosed with diabetes every 23 seconds and approximately one quarter of patients admitted to a UF Health Shands hospital having diabetes as part of their medical diagnosis, our mission is not only obvious … but increasingly urgent.

In picking one word to describe the Diabetes Institute for 2017, it would be that of growth. Indeed, this past year not only saw continued growth for some of UF’s hallmark diabetes programs but also marked expansion in many new areas not previously associated with our institute. While many notions could be highlighted, below are a represented selection from a program dedicated to research, improved patient care, training and public outreach — all efforts for which we at UF are proud to be a part.

Most people are aware of the importance of the heart, brain and lungs to healthy living, but the pancreas is one of the human body’s most often forgotten organs. That is, unless it isn’t working. The Diabetes Institute is helping to grow a strategic and highly collaborative effort focused on pancreas research at UF. So much so, we now think of ourselves as “Pancreas U.” Indeed, we have been the coordinating center for the JDRF’s Network for Pancreatic Organ donors with Diabetes (nPOD) program for a full decade ($26 million in funding to date); multiple Diabetes Institute investigators lead pancreas/pancreatic islet research programs funded by the National Institutes of Health, including those within the Human Islet Research Network, or HIRN; and the Leona M. and Harry B. Helmsley Charitable Trust is supporting a pioneering effort to create a Human Atlas of Neonatal Development & Early Life Pancreas, or HANDEL-P, to describe in detail how the pancreas develops from birth through 10 years of age, among other efforts. The Diabetes Institute is also overseeing a program that screens organ donors across the United States for blood-based biomarkers reflective of diabetes, among the largest non-transplant-related research efforts within the organ procurement organizations in the country. 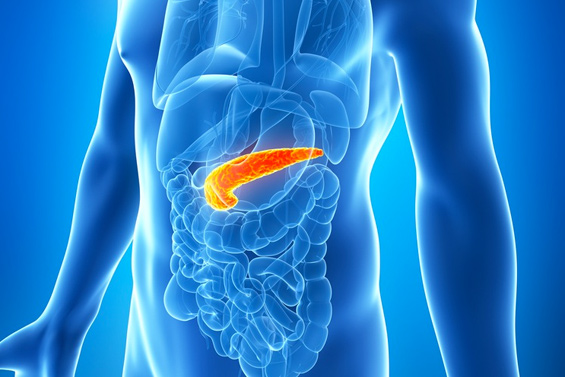 Beyond increasing efforts in pancreas research, in both 2016 and 2017, we placed an emphasis on obtaining NIH grants dedicated to research training, and the results have been remarkably rewarding. These efforts are highlighted, below.

Additional examples of research and training notables in 2017 include:

Starting with adult diabetes, Dr. Kenneth Cusi, chief of the division of endocrinology, diabetes and metabolism in the UF College of Medicine Department of Medicine, has led the charge to continue to improve comprehensive diabetes care at UF Health. Dr. Cusi created (and since 2013, chaired) the Diabetes Care Task Force to coordinate efforts and educate housestaff, faculty and other health care providers about inpatient diabetes care. With more than 14,000 outpatient visits in 2017 (~65 percent with diabetes), the UF adult endocrinology and diabetes division continues to relentlessly grow and serves as a referral center to the community and region (e.g., a 4-fold growth in outpatient visits in the past five years). Moreover, the division provided 5,120 inpatient consults and follow-up visits at UF Health Shands Hospital in 2017, and was recognized as offering the best inpatient consult service in 2015-2016, second best in 2017, by physicians within the UF Department of Medicine.

UF’s pediatric diabetes and endocrinology division has three fellows, two of which are graduating in 2018 and will, as a sign of growth, remain as new faculty. These fellowships are quite competitive, with over 30 applicants turned down each year. In 2017, UF clinical fellows published over 20 manuscripts and, to varying degrees, participated in more than 50 ongoing clinical trials occurring within the division.

Here, the Diabetes Institute seeks to extend the mission to the community at large. For example, Dr. Anastasia Albanese-O’Neill in the UF Division of Pediatric Endocrinology serves as the co-chair of the American Diabetes Association’s Safe at School Working Group. The group works to make sure the diabetes management needs of students across the United States are met so these children are healthy and safe when they are at school and school-sponsored activities.

The Diabetes Institute now provides a variety of educational offerings in the use of diabetes technology, including an introductory class on diabetes technology, insulin pump training (start and advanced), continuous glucose monitoring training, and training on data transfer and interpretation. Patients and their family members have the option to participate in diabetes technology education in person, in a group setting, or via telehealth using Vidyo software. This latter program was made possible through a grant from the UF Children’s Miracle Network.