UF researchers are studying ways to deliver agents directly to the cells causing problems in a person with Type 1 diabetes.

They have started a company that aims to improve the effectiveness of these kinds of drug therapies. Called OneVax, the company hopes to develop a vaccine that will prevent and reverse Type 1 diabetes. The start-up began as a collaboration between the J. Crayton Pruitt Family Department of Biomedical Engineering and Department of Pathology, Immunology and Laboratory Medicine.

Ben Keselowsky, Ph.D., associate professor in the biomedical engineering department, was one of the founders of the company. He studies controlled release systems for vaccines. “My background is biomaterials, so when I came here in 2005, I was looking for an immunology collaborator,” Keselowsky said.

Keselowsky found an initial collaborator in the department’s chair, Michael Clare-Salzler, M.D. He eventually founded the company with Todd Brusko, Ph.D., Clive Wasserfall, M.S., both immunologists within the Department of Pathology, Immunology and Laboratory Medicine, as well as Mark Atkinson, Ph.D., co-director for the UF Health Diabetes Institute. “Mark suggested that hey, we should start this company,” Keselowsky said. Atkinson has been studying Type 1 diabetes at UF for three decades.

“I started here at UF trying to find ways to prevent and cure Type 1 diabetes, and 30 years later, I’m still trying to figure that out,” Atkinson said. “Not to say we haven’t been successful along the way. We’ve discovered a lot. But bringing people from the biomaterials side of research together with medical research has made for a nice marriage.”

The company’s goal? To keep a body’s immune system from attacking those insulin-producing cells.

The company has already found traction in a National Institutes of Health-funded small-business grant. Lewis applied for and won the $225,000 grant. The researchers say they have three different technologies that could lead to a vaccine in the process of being patented, and Lewis’ grant will focus on studying the safety of the most advanced technique. “Our long-term goal is that we definitely want to make a product that has some type of impact on Type 1 diabetes,” said Lewis. 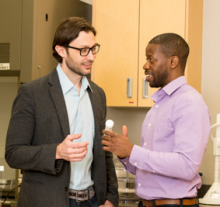 Currently, OneVax is housed in the Florida Innovation Hub at UF. Located in downtown Gainesville at the site of the former Alachua General Hospital, the Innovation Hub provides facilities as well as office space, laboratories and all of the legal and patenting advice needed to bring a product to the market place. Both Lewis and Keselowsky said that while the vaccine was promising in mouse studies, clinical trials require millions in funding as well  as interest from big businesses or pharmaceutical companies.

On March 11, 2014, the team found out that OneVax was a “Sweet 16” finalist for the fifth annual Cade Museum Prize. The $50,000 prize is awarded to an individual or company bringing an innovative idea or product to market. “In the long term, it will require investors. It will require business leaders,” said Keselowsky. “But the end goal is to make a product that will help people.”